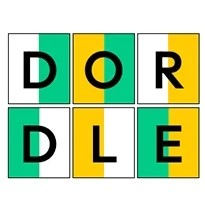 Two five-letter words must be guessed to complete the puzzles of Dordle, a slightly more difficult version of Wordle. You're not given any clues as to what the words might be at first, but as soon as you make a guess, the tiles change color to indicate whether or not you correctly identified a letter from the word, whether or not it is in the form of letters.

Both of today's words, dordle, require seven guesses to be correctly identified. You only get one more guess if you guess two words, rather than six if you guess one word.

Dordle is a great alternative to Wordle if you want to play a more advanced version. You won't be disappointed with this game! You can also take a stab at some of our other titles, such as Dordle 2.

You have seven guesses and two words to uncover. Each time you make a guess, the color of the boxes will change, giving you a clue as to what the word is.